Everything you were never taught about Canada's prison systems:
A primer on Canada's urgent Human Rights crisis (pdf) by: IntersectionalAnalyst.com
A Brief History of Prisons & Resistance to them in so-called Canada (pdf)

What is the average age of prisoners?
The average age upon admission in 2010-11 is 33 years of age (CSC). This is roughly the same for men and women. However, the average age of Aboriginal inmates is lower, 29.
Prisoner age at admission to Federal prisons is increasing. In 2010-11, 12.1% of the Federal incarcerated population is age 50 or over, compared to 8.1% between 2001-02.

How many prisoners have mental health issues in CSC?
In 2007-08, 11.1% of individuals committed to Federal prisons had a mental health diagnosis at time of admission and 6.1% were receiving outpatient services prior to admission.
In 2007-08, 30.1% of female prisoners compared to 14.5% of male prisoners had previously been hospitalized for psychiatric reasons.
The percentage of Federal prisoners prescribed medication for psychiatric concerns at admission has almost doubled from 11.0% in 1998-99 to 21.3% in 2007-08.
Female prisoners are twice as likely as male prisoners to have a mental health diagnosis at time of admission.
In BC prisons, in one seven year study, over 30% of the prison population had been medically diagnosed with a substance use disorder. An additional 26% were diagnosed with a mental disorder unrelated to substance use. Among those people diagnosed with a substance use disorder, more than three quarters were also diagnosed with a non drug-related mental disorder (concurrent disorders). Importantly, this does not necessarily include alcohol abuse, fetal alcohol syndrome or developmental disabilities which are not often diagnosed.
In BC, an estimated 80% of female prisoners have received a psychiatric diagnosis.

Source: Adult and Youth Correctional Statistics in Canada, 2017/18
(Missing most of Provincial / Territories Statistics due to 'Unavailability of Data'!)

69%: The proportion by which the black prisoner population grew during the same decade.
'These increases continue despite public inquiries and commissions calling for change and Supreme Court of Canada decisions urging restraint,' the report states.

One in four: The proportion of prisoner in the federal prison population who are over 50.
That's one-third more than just five years ago. According to the report, 'The system has become so risk averse that even elderly, chronically ill and geriatric persons who no longer pose any ongoing or dynamic risk to public safety are commonly held to their statutory or warrant expiry dates.' The prison population is not only getting older; it's also getting sicker. About 68% of federal inmates are overweight or obese. That number increases to 90% for those over 65. The average age at death for a federal inmate is around 60 – much younger than the Canadian average of 78.3 for men and 83 for women.

30%: The proportion of women prisoners who were previously hospitalized for psychiatric reasons.
Even more troubling: six in 10 women in the federal prison system are on some form of psychotropic medication to manage their mental health.

Close to 70%: Women in federal prisons who report a history of sexual abuse.
More than 86% report having been physically abused at some time in their lives.

578: 'Self-injury' incidents involving women prisoners in 2013-14.
Nearly three-quarters of those occurred at one facility: Regional Psychiatric Centre, Saskatoon. Overall incidents of prison self-injury have tripled in the last decade.

1 in 5: Deaths by suicide, which is the leading cause of unnatural death in Federal prisons.
Just under half of those who took their lives behind bars were on prescribed medications. Segregation is a major contributing factor to suicides behind bars. Almost half, 14 of the 30 suicides in federal prisons in 2014, took place in segregation cells. Five of the 14 had been held in segregation for more than 120 days prior to taking their lives. Of the 659 inmates in segregation today, 13.7 per cent have a history of self-injurious behaviour. The average length of segregation in 2013-14 was 27 days.

$108,376: Yearly cost of keeping a male Federal prisoner in jail.
The cost is nearly twice that for women inmates. By contrast, the cost of keeping offenders in community is 70% less. Meanwhile, total criminal-justice costs (police, courts, corrections, parole) have risen by almost 25% in the last decade, while the national crime rate has fallen dramatically.

$6.90: The maximum daily wage a Federal prisoner can earn.
That number hasn't changed since 1981, the report says, eroding 'the possibility of having any meaningful savings to support reintegration or maintain familial obligations on the outside.' About 60% of prisoners were identified as being chronically underemployed or unemployed at the time they entered Federal prison. And fully 60% have a formal education of Grade 8 or less.

Canada is missing swathes of information about young people in the justice system - such as the number who are in segregation (also called secure isolation, or solitary confinement). More than 7,600 young people aged 12 to 17 were in correctional services on an average day in 2016-17, according to Statscan (even this number is a fragment; it excludes Quebec, Nova Scotia and New Brunswick due to the unavailability of data).
But it’s difficult to know how those youth are faring within those facilities, and whether some provinces are more apt to put them in solitary or use restraining devices than others, said Alan Markwart, British Columbia’s deputy representative for children and youth.
"We’re dealing with young people with quite a disadvantage in the first place. And then to deprive them of any kind of mental stimulation and social contact for any prolonged period of time is probably not effective and can be quite detrimental."
The limited data available are troubling - a Manitoba study this year found 957 incidents of segregation in the province in a recent year, citing one youth who was kept in solitary for 400 straight days "in a cell smaller than a parking stall."
"We certainly have very significant gaps in [youth justice] data," says Nicholas Bala, a law professor at Queen’s University and global expert in youth justice. This includes data on the lengths of sentences youth receive, how many get adult-like sentences and the number in segregation. "It makes policy making difficult," he said.

4,178 or 19.2% of prisoners spent at least a day in segregation across Ontario Provincial prisons 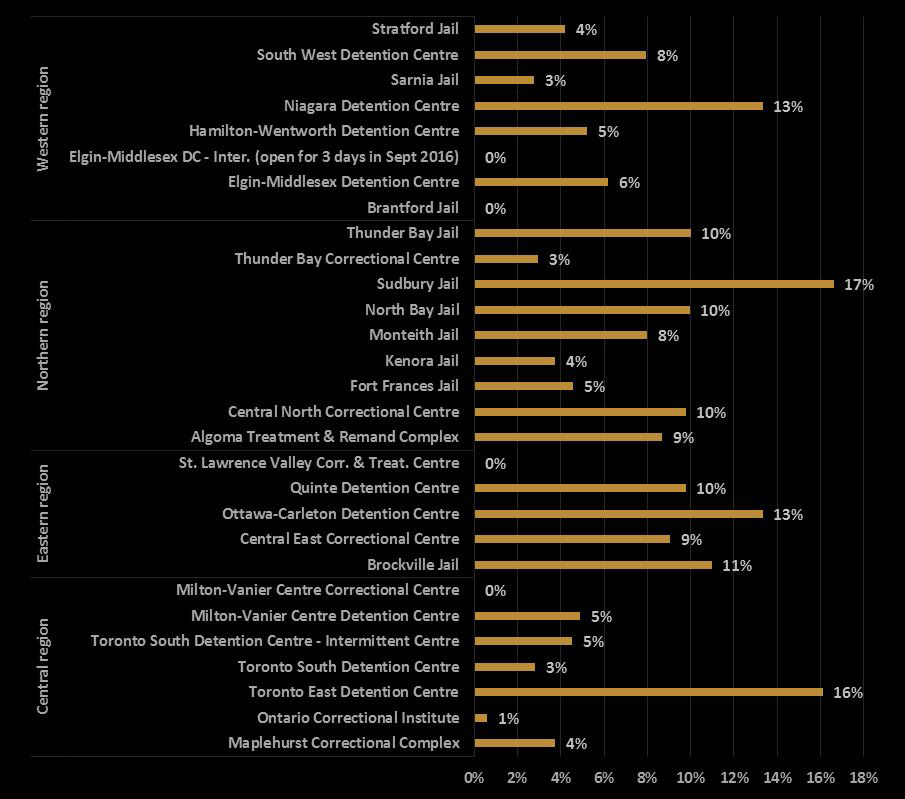 Source: Operating expenditures of the adult correctional system, by jurisdiction, 2017/2018